The evolution of VIF Communication is similar to the one of non-traditional new media.

With more than 30 years of experience in media as a journalist, host and producer in radio and television, Benoit Johnson, our president, has been interested in Digital Signage since its emergence in 2005.

From the beginning, the president and founder of VIF Communication regularly attended international conferences on digital signage and identified the best practices for these networks to reach captive audiences with tailor-made content.

Given our origins and our know-how in mainstream media, we take a “media” approach to digital signage: It’s not only the technology but how we use it that makes it interesting for the client! 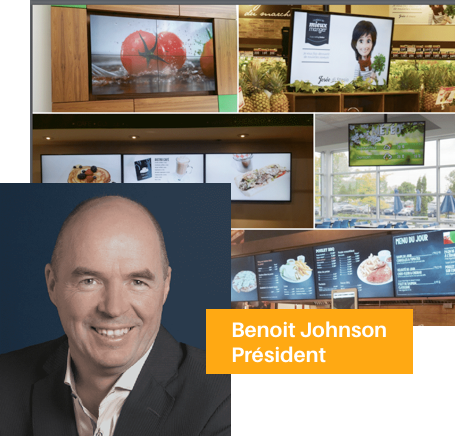 After the first consulting and content production mandates, VIF created its own Digital Signage advertising networks to respond to gaps in the market, first at ATMs under the name VIF Télé, and then in medical clinics with Medik-Télé. Since then, our expertise has also been recognized in the retail, corporate and restaurant sectors.

VIF Communication takes care of the management and/or integration of established digital signage networks belonging to major brands such as Sobeys-IGA, Rona and Laurentian Bank. We manage remotely more than 2,600 screens in Quebec and across Canada.